All news from Passport Power 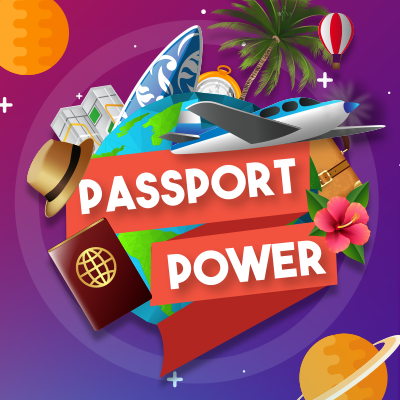 Fancy using your skills as a gamer to win prizes such as your dream holiday? That’s what Passport Power, an innovative, free-to-play game for iOS and Android developed by London studio E-Man Venture Labs, offers.

So, what is Passport Power like to play? Its gameplay should be reassuringly familiar to many: it contains ten travel-themed mini-games at launch, inspired by well-known classics (including Snake, Flappy Birds and so-called endless runners), as well as general knowledge quizzes and matching games. But it has a unique structure: it invites gamers to embark on an absorbing journey across Europe, earning Miles to travel from city to city by successfully completing games.

Each city in the game contains a number of Tickets, also won by successfully playing games, which can be entered in draws that will initially take place every three to four weeks. Each prize draw will see one lucky player win the dream experience which they have selected within the game. Every ticket entered in a prize draw will win a prize, ranging from free coffees via huge discounts to real-life cash or gift credit, you can even donate to your favourite. Players can enter multiple tickets in each prize draw, increasing their chances of winning. And there will be daily Mystery Prize draws, in which players will be able to win items like mobile phones.

As players progress to new cities, new games will unlock and difficulty levels will steadily increase throughout a player’s journey across Europe.  E-Man will add a stream of new mini-games to Passport Power after launch. Passport Power is free to play, but players can purchase Boosts, which bring extra lives or eliminate wrong answers in knowledge-based mini-games.

In order to provide a stock of desirable holidays for Passport Power players to win, E-Man has teamed up with travel industry partners including Virgin Holidays, along with a number of other companies, including craft TV channel Ideal World, to generate Mystery Draw prizes. Plus, E-Man Venture Labs will invest a significant percentage of revenue from in-app purchases into providing prizes for Passport Power.

In Passport Power we have a unique entry to the marketing toolkit that allows any brand, charity or service to engage and generate loyalty via game play engagement, as opposed to intrusive blocker type ads that mediation platforms offer.  The $400b digital advertising spend, can go further and we believe Passport Power offers CMO's an interesting alternative'

Passport Power is live in beta. It can be downloaded from the App Store here and from Google Play here.

E-Man is a leading London app and mobile games developer. It was the original developer of the innovative 2016 location-aware mobile Augmented Reality game Snatch, which pioneered the idea of providing real-world rewards for gaming prowess. For more information, visit the company’s website: www.e-man.co.uk

Passport Power can be download for iOS and Android here.